My Week of Woo Woo: How 1 Mainstream Beauty Buff Gave Into Holistic Healing at a Spa Retreat

When I was 13, I read an article in Cosmopolitan® about how important it is to touch and be touched. Granted, it referred to grabs and gropes of a sensual nature, but my impressionable adolescent mind adapted it into a literal hands-on approach to all things.

So when I plan my yearly, weeklong visit to my favorite place on the planet — Rancho La Puerta®, a wellness resort in Tecate, Mexico — I schedule my spa appointments based on this paradigm: straightforward, no-nonsense, rub me/scrub me treatments like deep tissue massages, loofah exfoliations, and pore-purging facials.

But over the years, I’ve heard so many other guests at the Ranch (the insiders’ nickname for the place) gush about the more spiritual spa options on offer: they raved about Reiki; experienced post-acupuncture epiphanies; wept after Watsu®. Was I missing out by sticking to the safe side of the spa menu? I decided it was finally time to try some of these holistic healing treatments for myself. So, I did one a day for five days. Here we go!

Imagine being a sucky math student your whole life and then one day enrolling yourself in Advanced Calculus. As I laid down fully clothed on the treatment table while my therapist Jonelle explained The Lifeline Technique to me, I realized that I was in the spiritual equivalent of Calc class. The technique is a complex healing system that connects the conscious and subconscious minds. The idea is that we hold onto traumas and bury them deep in our bodies where they can cause physical pain. Through a combination of up to 16 different modalities, including crystal therapy, chakra balancing, and Chinese Medicine, this form of energy medicine helps us find those traumas and release them.

Jonelle put her hands into the “I love you” sign, and waved them over my body, offering “infinite love and gratitude.” Then she asked me to state an intention — what I hoped to gain from the treatment — out loud, three times. I am not one for stage fright, but the idea of voicing my innermost desires made me cringe. Still, Jonelle had such a beatific expression — plus all that infinite love and gratitude — so I knew I was in a safe place. (The internet, however, is not, so I’m keeping my mantra to myself. If you need to picture me saying something, go with “Serenity Now!”)

We moved onto figuring out what my blocked emotions were. She’d identify an unpleasant memory — a time when I felt deceived, or a time I was self-destructive — and then ask where I felt that memory and how it should leave my body. So, for example, I felt “deception” in my stomach and it wanted to exit through my mouth. She swept her hands from my stomach up toward my mouth again and again, barely grazing my body, to direct those negative feelings out of my body. In all, we found four spots where the memories were hiding, and spent about a half hour shooing them away.

The next thing I remember, I jerked awake with a snort. I guess all that releasing of negativity can tire a girl out! I spent the next 20 minutes or so zoning out and thinking as she cradled my head. It occurred to me that I never allow myself the time to just think like that. After my kids and husband go to bed, I spend my alone time totally distracted by emails or TV or social media. (Wait, was I having a moment of introspection? So unlike me!) At the end of the 90-minute session, Jonelle had me repeat my mantra aloud three more times. She had barely laid a finger on me, but I still had that post-massage, lightheaded buzz. 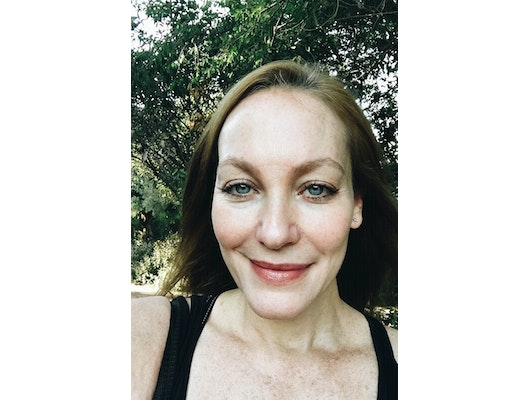 I scheduled a cupping appointment — and the treatment totally sucks, but I mean that in a good way. Kidding aside, it’s an ancient Chinese practice in which glass cups are used as suction devices on the skin. The suction loosens the skin and underlying fascia tissue, while dilating capillaries, which allows for more blood flow to the area to promote healing. Cupping also promotes lymphatic drainage, which is how it gets its “detox” credibilities.

You may remember when Gwyneth Paltrow stepped out for a movie premiere in the early aughts with multiple circular “hickeys” on her back, ushering cupping into the public consciousness. I was just imagining myself explaining to everyone where my perfectly round bruises came from when I learned this would not be the case. The treatment offered at the Ranch is a modified, gliding version of cupping, and it doesn’t leave marks. My minor disappointment was immediately replaced by anticipation: Waiting for me in the treatment room was Luz Esther, one of the Ranch’s most requested therapists. Score!

While I was lying on my stomach, Luz Esther began pinching the surface of my back — first vertically, then horizontally. She applied a layer of massage oil and the sucking sensation started. It felt like she was running a vacuum cleaner nozzle up and down my back, pulling the skin away from the muscle. I sat up to inspect the tool she was using and giggled: The device looked like a cross between a specimen cup and a diaphragm.

Luz Ester slid different-sized cups up and down over every part of my body, then made little flicking motions with her fingers. There was even an itty-bitty cup to suck on my face, which felt like a flurry of kisses. But make no mistake: Overall, cupping hurts, but it hurts so good. The next morning, I woke up with nary a sore muscle, and a vow to try cupping again.

I was feeling pretty fabulous by this point, and totally game to try something completely different, like craniosacral therapy (CST). In CST, the practitioner uses a feather-light touch to manipulate the cerebrospinal fluid, which surrounds your brain and spinal cord. The goal is to reduce stress, calm the nervous system, and relieve pain. My mom had tried it once. Her reaction: “I kept waiting for it to start.” And I can see why she felt that way. I’d call this treatment . . . subtle.

Jonelle, who at this point I considered to be my personal spirit guide, asked where I had any pain or injuries. It was a longish list, including an ankle, my lower back, a pectoral muscle I’d strained during Cardio Hip-Hop ‘90s Flashback class, and my neck. She started by very gently holding my ankles — and stayed like that for approximately 15 minutes. Though she wasn’t moving her hands at all, I started feeling all kinds of little zaps and twitches in my feet.

“Holy crap, I think it’s working!” was the last thought I had before I fell into that sweet space when you’re not quite asleep, but you’re definitely not awake. I felt her move to the other aches I had mentioned, where she placed her hands ever-so-gently. And once again, at the end of the hour, I found myself sound asleep with my head resting in Janelle’s hands. Was it lovely? For sure. Did I also make an appointment for a deep tissue massage later that same day? Absolutely. 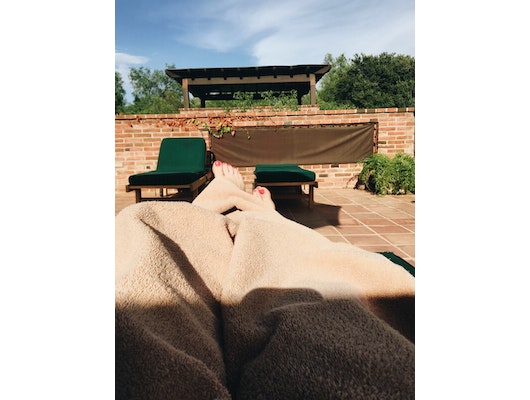 I had originally signed myself up for an Energy Balance session, in which the therapist would balance my chakras via color, light, sound, aroma, energy work, and something called “sacred geometry.” But at this point, I figured my chi was open enough to enjoy something a little more hands-on. So I switched my appointment to gemstone reflexology, hoping that at the very least I’d get a foot massage out of the deal. And, oh, did I.

My wonderful therapist Elva explained that in reflexology, areas of the feet correspond with different organs and systems of the body. My right foot largely corresponds to parts on my right side, and the same goes for my left foot. Supposedly, when muscles tense up, crystals form in the blood.

By putting pressure on specific parts of the feet and breaking up any crystals within them, you can improve circulation to the related body parts. I was a little skeptical, but as soon as she started squeezing, I could feel little crunching sensations — adios, crystals! As she moved from toes to heels, using delightfully strong pressure, she described what corresponding organ or system she was working on. For example, the tips of my toes supposedly connect to my sinuses, my arches to my stomach, and the top of my feet relates to my back.

It was the most thorough and educational foot massage I can remember. Towards the end, Elva pulled out three pretty pink stones. I was expecting some talk about the sacred power of crystals, but the three rose quartz rocks were used just to dig deeper into the nooks and crannies of my achy feet. My kind of healing! 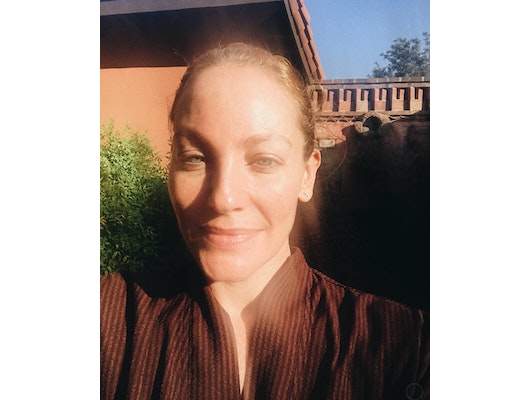 By now you must know I don’t believe in horoscopes but, the fact is, I’m a Cancer who loves to be in the water. So, a therapy called Water Dance sounded appealing, especially because it has its roots in Watsu, aka water shiatsu, which I’d tried before and loved. A therapist pulls you around the surface of a 96-degree pool, stretching your limbs and manipulating your muscles and your spine in ways you just can’t on land. Water Dance takes it one step further: The therapist takes you under the water, the idea of which both terrified and thrilled me.

A few minutes before my treatment, I passed a tall, inked man with muscles the size of his shaved head and assumed he was headed to the weight room. It was my don’t-judge-a-book-by-its-cover moment when the man turned out to be Dave, Watsu and Water Dance specialist. Once we were in the pool, Dave explained how we’d do the underwater stuff: After we got comfortable in the water together, he’d touch my nose to let me know he’d be putting nose plugs on me. And when he tapped my body three times, that meant I should take a deep breath, because we were going down! We practiced once at my request, and it was less scary than I’d imagined. Let’s get this pool party started!

With my eyes closed and ears submerged, it was like I was in a dream, and I was a fairy, gracefully flying through the air. (It sounds so corny when I read it back, but it’s true!) And when I was underwater, I felt like a little dolphin, frolicking behind its mother (yep, that would be Dave). It was so incredible that when I came up for air, I just started laughing — the experience was one of pure joy! After years of hitting spiritual snooze, this week at the Ranch was an overdue awakening.

Some complimentary services were provided to the author for the purpose of writing this article.