In this series, Top 11, influential people share 11 ways they take care of themselves including beauty, skincare, and aesthetics. Knowledge is power!

The story behind Clark’s Botanicals® has been well documented, but bears repeating: At the age of 24, just beginning a bright career in fashion public relations, Francesco Clark suffered a swimming injury that left him paralyzed from the neck down. Doctors told him he would never be able to breathe on his own again, much less move.

Spoiler alert: he proved them wrong, but it took a long time. “I didn’t leave the house for three years,” says Clark. “A sense of guilt and depression put me through a phase where I thought, ‘Can this please be a bad dream? Can this please be a nightmare that I wake up from tomorrow?’ It wasn’t.” He became a wallflower, shaving his head and not looking in the mirror (“and I worked in fashion!” he says).

It was seeing his struggle through his mother’s eyes that really got him out of it. Well, that and actor Christopher Reeve. “The day I heard that he passed away, I said, ‘I need to take responsibility for what happened and do more to be part of the cure instead of expecting other people to do it for me,’” he says. “I had been asked to be part of an advocacy group for people with disabilities. So I said yes, but in order to go to the meeting, I was like, ‘Mom, I have to leave the house. And I have to wear a shirt and pants.’ And she was like, ‘Oh, thank God.’”

Meeting Clark now at 40, it’s hard to imagine he ever had such a dark moment. His eyes have a mischievous twinkle and he speaks with a wink in his voice, his sentences punctuated with sarcasm and chuckles. He has an energy and positivity about him that makes you instantly comfortable, which is a testament to just how far he’s come.

But there was another hurdle in his journey. A side effect from his injury was that his skin stopped being able to sweat. “I developed the perfect storm of everything that could go wrong with my skin,” says Clark. “It looked like it was 10 years older. It was oily, but dry in patches. I developed rosacea.” Slowly finding himself again meant figuring out how to fix his skin, but after trying everything, he couldn’t find anything that worked.

With the help of his father, a doctor trained in homeopathic medicine, he starting mixing up formulas in his family’s kitchen. “It's the way I grew up,” he says. “Every morning I would take different vitamins my dad put together according to our bloodwork. It was practically 30 vitamins a day, but I never missed a day of school.” They finally landed on a concoction that worked for him — and it worked for his sister, his mother, and his father’s patients. They were giving it away to friends, including his former boss Glenda Bailey, editor-in-chief of Harper’s Bazaar®, who decided to feature it in the magazine. The rest, as they say, is history.

“I didn't [originally] make any of these products to sell them,” says Clark. “But being a founder meant getting a sense of empowerment and voice. When the company started to build momentum, it meant building a sense of community with other people.”

That authenticity is at the core of everything Clark’s Botanicals does, but especially product development. Ever since the first formulas were whipped up in the kitchen, the brand has used the essential oil jasmine absolute in all its products, including bestsellers like the Smoothing Marine Cream ($115), Deep Moisture Mask ($72), and Anti-Puff Eye Cream ($87). That’s because jasmine absolute is known to be a gentle essence with anti-bacterial and anti-inflammatory benefits. This makes it perfect for sensitive skin — not just Clark’s, but that of his brand’s loyal devotees, too.

The products are also all multitaskers, based on Clark’s needs. “It's difficult for me to open a jar and pump products,” he says. “So I need products that will do three things in one, but I'm not going to forego what I expect the results to be.”

It’s that philosophy that dictates his personal routine as well. “It's always about multitasking,” he says. “I'm never just sitting there doing nothing. And when I am, it drives me crazy — which is ironic because I can't move most of my body. I just can't sit still.” On the way to meet for our interview, he said he got dressed and brushed his teeth in the car, so he needs products that he can take with him everywhere.

What exactly does Clark do to keep himself looking every bit the modern-age beauty brand founder he is? Here are his Top 11. 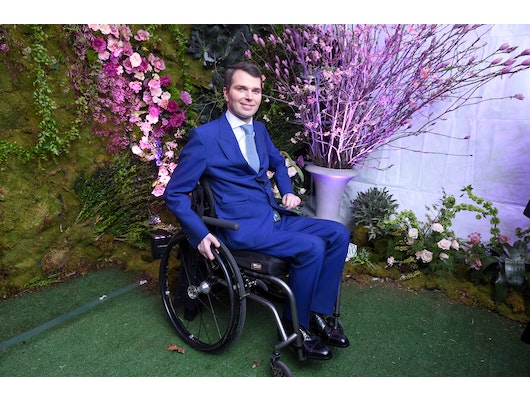 [Editor's note: Retinol shouldn't be used by those who are pregnant, considering getting pregnant, or nursing. Please consult with your licensed provider before use.]