Could A Cryotherapy Facial Be the Perfect Pick-Me-Up for Puffy Skin?

Ultra-cold temperatures are hardly pleasant, but there is something to be said for how they can instantly invigorate the look of puffy, lackluster skin. (Think: a splash of icy water in the morning, that newfound firmness after a day on the slopes.) I suppose I shouldn’t have been surprised, then, when I noticed a cold-based “cyrofacial” pop up on the menu at my favorite spa. Curious to learn more, I spoke to a few experts about the trend. Here’s what I learned.

What, exactly, is cryotherapy?

Cryo comes from the Greek term “kryos,” which literally translates to “cold.” Turns out that despite its futuristic vibes, “cold therapy” has been around for quite a while.

“Many people around the world have used cold temperatures to stimulate and refresh the body for hundreds of years,” explains Dr. Robb Akridge, a skincare scientist who also happens to be the co-founder of Clarisonic®. “Examples include the ‘polar bear’ clubs, for which members jump into freezing water to stimulate their bodies, or those who use hot tubs or saunas only to plunge themselves into snow or an ice bath [afterward].” Some other examples of the way we use cold therapy include ice baths, ice packs, cooling sprays, and cooling lotions. And now, apparently, facials.

On a separate note, full body cryotherapy chambers — which involve spending two to four minutes in a capsule that fills with cold vapors via liquid nitrogen — present possible risks. In fact, the FDA issued an advisory to consumers in 2016 that shared the risks of whole body cryotherapy, as well as the lack of evidence of any benefits, and recommended that people discuss it with their doctors before trying it. Note: no cryotherapy device has been approved by the FDA to treat any medical condition. 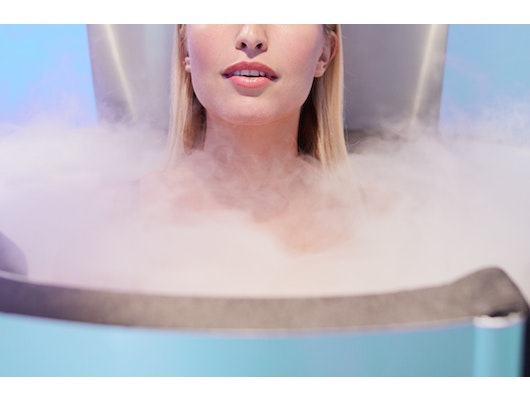 What are cryofacials and how are they different from whole body cryotherapy?

In terms of aesthetics, “cryofacials” are starting to pop up on spa menus. They are similar in concept to the full-body chambers where liquid nitrogen is utilized to create super cold vapors. The primary difference, of course, is that only your face receives treatment and no part of your body is fully submerged in a chamber. In a cryofacial, a beam of vaporized liquid nitrogen is directed at the face.

The Luminous Medspa and Salon dubs this treatment the “Freeze Your Face” facial. “We use a controlled beam of vaporized liquid nitrogen to freeze the skin on the face, scalp, and neck area. It’s a quick, non-invasive treatment that has great results,” says Heather Hoffman, esthetician and founder. All in, the process takes roughly 10 to 15 minutes to complete.

According to Hoffman, recipients may notice depuffing results after one treatment and it boasts zero downtime. For this reason, she says it’s a great pick-me-up before an event. For longer-lasting results, she recommends consistent cryofacial treatments. 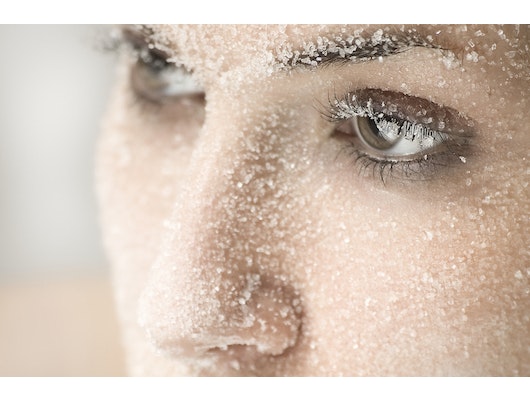 Marie Watkinson, a 50-year-old woman based in New York, recently received her first cryotherapy facial from The Port Jefferson Salt Cave. Having been in the spa industry for 25 years, she was curious about what this new treatment could do for her skin and decided to go for it.

“I enjoyed the cold and it felt very nice to me — similar to getting a jolt of cold air from the opening the freezer on a hot summer day,” she says. “Immediately, my skin looked and felt tighter.” She shared that her eyes tend to get swollen, especially in summer, “Most of that vanished with just one session. Overall, I loved it because I had a great result with no downtime. I would definitely do it again.”

She tells us that the initial results lasted for two to three days, but that she can still see a difference in her skin three weeks out.

At this point, cryofacials are still very new and it’s important to acknowledge that there’s currently a lack of robust scientific literature to back up claims. It’s important you speak to your doctor to get the all-clear pre-treatment. We also recommend tracking down a reputable, recommended cryotherapy spa. Your safety comes first — no matter how amazing the photo opp will be for your Instagram account.

A cryofacial was gifted to the author for the purpose of writing this article.

Beauty News
Facials,Cryotherapy
YOU MIGHT ALSO LIKE
RECOMMENDED READING
You are now leaving Spotlyte. Links to third-party sites are provided as a courtesy. Allergan does not control or endorse, and is not responsible for, non-Allergan sites, including services or products offered on such sites. Allergan’s Privacy Policy and Terms of Use do not apply to third party sites.