This Futuristic Gadget Is the Easiest, Laziest Way to Take Care of Your Skin

A religious devotion to skincare is part of my schtick, but even I have been known to lapse into laziness once in a while. I’ll skip a thorough face-washing in the name of a cleansing wipe, slather on a single product before bed instead of my preferred three, or (don’t judge me) skip a nighttime regimen altogether. I know, I know…I’m ashamed.

It just so happens that there are a few brands I can count on when I’m being especially lax, and one of them is Dr. Dennis Gross Skincare. I’ve been using and loving the brand’s low-effort, high-reward chemical peel pads for over five years. But the newest launch, the DRx SpectraLiteTM FaceWare Pro ($435) promised to be even more straightforward.

This extremely futuristic mask uses five kinds of light-emitting diodes (LEDs) to treat skin — all while making you look like the latest member of Daft Punk. If you (like me) have never truly believed that simply flashing some lights in your face actually has benefits, get ready for all the science supporting it. According to Dr. Gross himself, NASA first used LED lights in space to experiment on plant growth.

“They found that the LED lights stimulated cells’ natural production of ATP (adenosine triphosphate),” he explains. (This organic chemical is found in all forms of life and provides energy to cells.) “In human cells, it was further proven that when fibroblast cells get a boost of ATP, they produce more collagen,” Dr. Gross shares. “More collagen equates to a reduction in fine lines and wrinkles and a more even, radiant complexion.”

Since NASA’s original studies, the use of LEDs in the skincare world has truly proliferated. In fact, this is actually Dr. Dennis Gross Skincare’s second LED mask — the first being the SpectraLite EyeCare Pro ($159), designed to tackle crow’s feet and other concerns around the eyes. According to president and CEO of Dr. Dennis Gross Skincare, Carrie Gross, that tool sold out in three days, and that inspired her to develop more technology-based products. Each mask is handmade, designed to be easy to use, and in my opinion, pretty fashion-forward for wearable beauty tech (the FaceWare features a rose gold finish). “The synergy of the LED lights combined with the results-driven topical products takes your at-home skincare routine to the next level,” she explains. 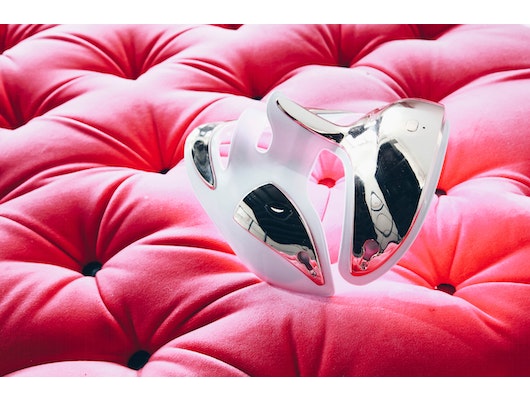 The pair was inspired by Dr. Gross’s own in-office treatments for their LED devices. Most often, this kind of technology can be found in doctor’s practices, where they’re frequently added as a “booster” to other treatments. “I recommend using LEDs after a peel — either professional or at-home peels — because LEDs are able to better penetrate after you exfoliate dead cells from the skin’s surface,” he explains.

Having never had any kind of LED treatment, I was ready to put Dr. Gross’s logic to the test with the SpectraLite FaceWare Pro. After charging it (for the recommended two-plus hours), I examined the inside of the device. Covered by a thick layer of clear silicone is a panel comprised of 162 LEDs — 100 red, 62 blue. Depending on your needs, you can turn on just the red, only the blue, or combine both for a double-duty treatment.

According to Dr. Gross, the red LEDs consist of Infrared, deep red, light red, and amber lights. The former is invisible to the naked eye and penetrates deepest. “Infrared combats the signs of aging, replenishes dermal and epidermal cells, stimulates the natural production of collagen and elastin, and speeds up the recovery process,” he says.  The other three types of red light work to promote cellular repair, increase circulation for more vibrant skin, and soothe inflammation and redness (ironic, no?).

Blue light is known to kill acne-causing bacteria, as well as purify the skin by helping to stabilize your oil glands. I admit that when I first received the SpectraLite FaceWare Pro, I was wary of using it because I have heard all about the damage that tech devices’ blue light can cause on skin. But according to Dr. Gross, I have no need to worry.

“The biggest – and most important — difference is the wavelengths of each blue light,” he explains. In the past, UV light was used to help treat skin, but as we know now, UV can be dangerous and carcinogenic. Now, doctors use specific wavelengths of blue light instead. “Overall blue light ranges from 380 to 500 nanometers. Potentially harmful blue light that is emitted from technology is wavelengths lesser than 415 nanometers.” This LED mask keeps its blue light at 415.

Light with a wavelength below 415 is close to UV and can be harmful, which is why the blue LEDs in this device are at exactly 415 nanometers. “This is the ‘peak’ wavelength for blue light,” Dr. Gross notes. “It kills more bacteria and requires a shorter treatment time than higher wavelengths of blue light as it is most effectively absorbed into the skin.”

I admit that I am not particularly prone to breakouts, but have been known to suffer from the occasional deep, lurking blemish every few weeks. I happened to get one in the days leading up to my experimentation with this mask. Considering that I’m also always trying to Benjamin Button myself into a state of perceived perpetual adolescence, using the combined red and blue setting appealed to me.

Let me remind you that, again, I was skeptical of using light as a form of skin treatment. (Where’s the tingle? The action?) But I was pleasantly surprised after using the SpectraLite FaceWare Pro — both almost immediately and after several weeks. As a professional multi-tasker, I opted to wear it at my desk while working (to the curiosity and delight of my colleagues).

After just two days, the massive pimple (which I had also been treating at night with topical exfoliants) faded into obscurity. Since then — and regular use of the device over about two weeks — I haven’t had a single breakout. (Plus, Dr. Gross points out that blue LED won’t dry out the skin, a common drawback to post acne treatments.) I’ve also noticed both slightly firmer skin and a slightly-more smoothed appearance to the line running across my forehead. And bonus! The treatment only takes three minutes, so it’s easy to find time to fit it into my routine. While I’m enjoying using it at work, I look forward to bringing it home. Then, I can simply pop it on after cleansing and before drifting peacefully to sleep, knowing that in this scenario, being lazy is actually good for me.

Products may have been gifted to the author for the purpose of writing this article.