Why the Oxygen Facial is Actually Worthy of the Hype

Even though we’ve always been surrounded by it (and need it to live!), oxygen is on the receiving end of serious hype in the beauty and wellness community. There are oxygen rooms that sell “hits” of concentrated oxygen to patrons, over-the-counter inhalers with the stuff that you can keep in your purse, and — most interestingly to us — numerous beauty products and spa treatments that feature the element as the star ingredient.

As trendy as oxygen is, though, it deserves all the hype. We did some research into the major skincare benefits of O2 — and discovered how you can secure them for your own skin at your local spa. (The concept of an oxygen facial, for one, is something that's popping up a lot recently.)

The concept of trying to increase oxygen levels in the body (including skin tissue) has existed since the 1930s, which is around the time hyperbaric oxygen chambers were invented. This begs the very obvious question: “Aren’t we swimming in the stuff — what’s the point?” The short answer to this is that atmospheric oxygen levels aren’t as high as you might assume. In fact, the air we breathe is only 21 percent oxygen, with nitrogen making up 78 percent and argon and carbon dioxide making up the remaining one percent.

Oxygen, it turns out, is really good for us, so it makes sense that we’d want to increase our access. Luckily, the oxygen facial exists — and it's just what it sounds like.

“Directly applying oxygen to the skin surface [during an oxygen facial] is suggested to strengthen the skin’s elasticity and help eliminate acne-causing bacteria. It even is able to provide a plumping effect to reduce fine lines and wrinkles and even out skin tone,” says Dr. Michael T. Somenek, a double board-certified facial plastic surgeon.

Oxygen has also been linked to expedited wound healing, and preliminary studies indicate that oxygen may even prevent wrinkle formation — which is all the more reason to consider an oxygen facial.

Oxygen has historically been used medicinally, but it’s gained momentum in recent years in the general health, wellness, and beauty communities. The oxygen facial is especially popular right now — even Madonna swears by it and has incorporated the treatment into her regimen.

“An oxygen facial is great for someone who wants to create a plumper and smoother look to their skin,” explains Dr. Somenek. “The moisture boost that makes the skin smoother may make it easier to apply makeup, as well.” He adds, “[The oxygen facial] is a popular treatment to get prior to a big event because it can instantly perk up the skin, reducing the appearance of fine lines and wrinkles, and get you ‘red carpet ready.’” 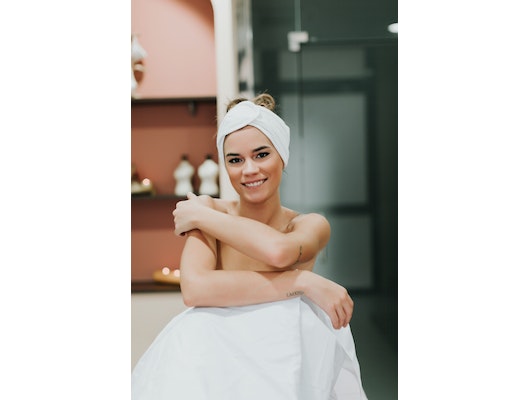 Naturally, every spa will have its own way of administering an oxygen facial. Typically, though, the treatment involves a special tool that imparts high levels of high pressurized oxygen directly to the face. This can be paired with a gentle chemical peel, dermabrasion, extractions, and deep moisturizing treatments containing hyaluronic acid.

“At Olga Lorencin® Skin Care Clinic, there are various oxygen devices that produce purified oxygen that we use in treatment rooms,” explains celebrity esthetician and founder Olga Lorencin. “The oxygen is delivered into the skin through an air device brush in combination with other serums and nutrients.” By infusing the oxygen into skin, it promotes enhanced absorption and efficiency of other skincare products. “It also imparts an immediate glow due to increased circulation and higher tissue oxygenation levels,” notes Lorencin.

The Bliss® Spa chain, which is frequently found in W Hotels®, is famous for its Triple Oxygen Facial®. This is a truly luxurious, 75-minute experience that incorporates oxygen not once, but in three specific phases. The facial begins with a gentle cleanse, followed by a SkinCeuticals® peel. Next, oxygen is delivered to the skin to help open pores and prepare them for extractions. After removing any blackheads, the esthetician will applies an O2 mask that bubbles like crazy (you can actually buy a version of the in-spa mask, Bliss Triple Oxygen® Self Activating Facial With O2 Molecules, $22). Finally, a hydrating enzyme solution is applied to the skin, followed by a vitamin-doused oxygen spray for an extra boost in glow.

All oxygen facials and their various steps vary — and thus, results will, too. But speaking from personal experience (I indulged in the Triple Oxygen Facial), said results can be genuinely dramatic. My skin felt exceptionally hydrated and radiant, even compared to previous facials I’ve received. I even earned several compliments about my skin in the days that followed, including one from my partner, who was dumbstruck by my luminous complexion when I returned from the treatment.

The best part about oxygen facials, however, is that they are considered safe for all skin types and result in zero downtime. Coupled with the hydrated glow they leave behind, this makes them an ideal option for a before-event treatment, so go ahead and pamper yourself.

Products may have been gifted to the author for the purpose of writing this article.

Face Care
Facials,Trends
YOU MIGHT ALSO LIKE
RECOMMENDED READING
You are now leaving Spotlyte. Links to third-party sites are provided as a courtesy. Allergan does not control or endorse, and is not responsible for, non-Allergan sites, including services or products offered on such sites. Allergan’s Privacy Policy and Terms of Use do not apply to third party sites.