I Tried a Fat Freezing Treatment on My Double Chin

While some people may covet fuller lips, wider eyes, or higher cheekbones, my personal beauty wish has always been centered on my double chin. I know it seems like a bit of an arbitrary spot to dream about, but just as the late, great Nora Ephron felt bad about her other areas, I feel disappointed by my double chin.

Genetics have denied me the sort of definition I crave, instead bestowing me with what amounts to a straight line from my chin to my neck. It’s as if someone began to sculpt my face, got bored or realized they were late to Pilates, and just swiped downwards and ran out the door.

To add insult to injury, now that I’ve turned 35, despite regular exercise and a (mostly) healthy diet, I’ve somehow become the not-so-proud owner of a small bulge of fat beneath my chin. So to say things have been going downhill for my double chin is true on so many levels.

Frustrated with my lot in life, I turned to my aesthetic fairy godmother, Laura Dyer, MSHS PA-C at Dr. Amy Wechsler Dermatology, for some answers. According to her, this fat pad — commonly referred to in doctor speak as submental fat — is not necessarily caused by weight gain, but rather age. “As we cross into our thirties, we start to store fat in certain spots,” she explains, with the chin being one of the most common. Cool.

I was mentally flipping through my Rolodex of plastic surgeons, trying to figure out if liposuction for my chin was something I would actually go through with, when Dyer casually mentioned that there was an option available that wouldn’t require someone rooting around under my face with a handheld vacuum. She told me I was a candidate for CoolSculpting®, also known as fat freezing.

[Editor’s note: The CoolSculpting treatment is a non-invasive fat-freezing treatment that effectively reduces fat in certain self-proclaimed “problem spots” in the submental and submandibular areas, thih, abdomen, flank, and upper arm, along with bra fat, back fat, and underneath the buttocks (you know, those bulges that just won’t go away, regardless of how much you sweat it out on the treadmill). While it isn’t a weight loss solution, fat-freezing can reduce pouches of fat. As with any procedure, there are risks and side effects, so talk to a licensed provider to see if it’s right for you.]

[Editor’s note: The CoolSculpting® procedure is not for people that have cryoglobulinemia, cold agglutinin disease, or paroxysmal cold hemoglobinuria.]

People most commonly think of fat freezing specifically for body bulges in the tummy, hips, and thighs. Dyer says that a mini applicator — designed specifically for smaller areas like bra rolls and my under-chin situation — exists. I did the real-life version of the raised hand emoji girl and had her pull the machine out on the spot.

The mini fat-freezing attachment works just as it does on the rest of the body, cooling down the fat cells to the point where they crystallize and die off. One treatment results in up to 20-25 percent fat reduction in the treated area. Those treated fat cells won’t be coming back to haunt you — there will be no ghost of chins past happening here. 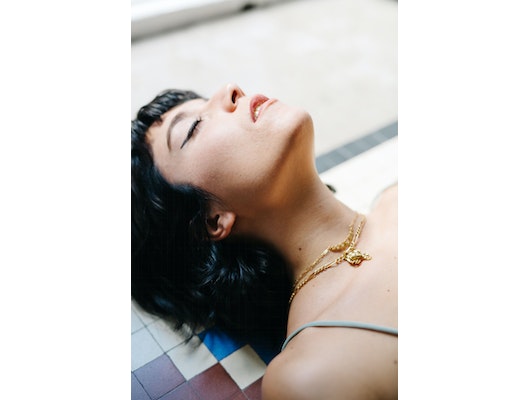 After using a wipe to clean off any excess oils or lotion, Dyer applied a gel pad to “create a barrier between the cooling panel and your skin.” She then placed the applicator against my chin, where it suctioned itself on. A very stylish Velcro strap was attached to the panel and wrapped around my head to hold the device in place.

As with my past CoolSculpting experiences, my skin felt very cold for the first few minutes, then went pleasantly numb. I was a little uncomfortable during my session, but only because the whole contraption was a bit heavy and unwieldy. This forced me to keep my head in one place, wedged up against a pillow. The treatment itself lasts for 45 minutes and when it was finished, Dyer massaged the area to help break up crystallized fat and optimize cell death. My skin was pink for the first two hours; and because I bruise easily, I developed a slight contusion. It kind of looked like someone with an abnormally large mouth gave me a hickey. (There’s a nice visual for you to start your day with.)

My skin was numb for a few days following the treatment, but sensation gradually returned. By day four, I had full sensation and was hickey-free. Since you may get more results with additional treatment, I went back to Dyer a few weeks later for a second round.

As for my results, I’m pretty pleased. The fat pocket that had taken up residence under my chin has been more or less evicted. I can actually see some definition. In my case, that little bit of sculpting makes a whole lot of difference.

The CoolSculpting procedure is FDA-cleared for the treatment of visible fat bulges in the submental area, thigh, abdomen and flank, along with bra fat, back fat, underneath the buttocks (also known as banana roll), and upper arm. It is also FDA-cleared to affect the appearance of lax tissue with submental area treatments.

Aesthetic Treatments
Reviews,CoolSculpting,Advice
YOU MIGHT ALSO LIKE
RECOMMENDED READING
You are now leaving Spotlyte. Links to third-party sites are provided as a courtesy. Allergan does not control or endorse, and is not responsible for, non-Allergan sites, including services or products offered on such sites. Allergan’s Privacy Policy and Terms of Use do not apply to third party sites.