I have dabbled in quite a few unconventional treatments in the name of beauty, but facial acupuncture may have been the most unique (and one of the most effective!) I’ve experienced. If the thought of transforming into a human pincushion makes you queasy, don’t let that deter you —  the treatment feels nothing like that.

“The acupuncture needle is more like a tiny wire,” explains proprietor of the AcuFacial, Shellie Goldstein, as she brandishes a needle over my face and sticks it (painlessly) between my brows.

OK, so what exactly is an AcuFacial? It’s basically what it sounds like: a hybrid of acupuncture and a traditional facial. It harnesses elements of both practices into one glow-boosting treatment, simultaneously addressing a myriad of skin concerns. “[The facial] is designed to soften fine lines and wrinkles, lift muscles that are too flaccid, relax muscles that are too tight, and basically give you a healthy, youthful look,” Goldstein explains.

Relaxation — that elusive feeling many of us demote to the bottom of our to-do lists — is a key component of the treatment. “If you have a lot of tension in your body, you’re going to have furrowing between your eyebrows and creasing across the forehead,” Goldstein explains. “[The AcuFacial] softens those muscles that are too tight.” 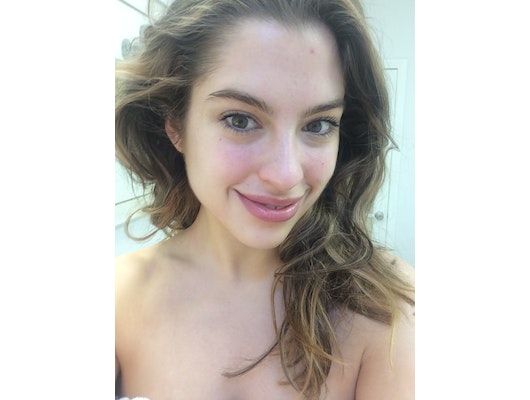 Once the muscles have softened, skin drapes over them more smoothly, which consequently blurs wrinkles. Incidentally, the AcuFacial is an excellent treatment to use in tandem with other skin-restoring dermatological procedures.

In addition to softening overly-contracted muscles, the AcuFacial is also designed to reduce puffiness. “According to Traditional Chinese Medicine, if your digestion is poor, you’re going to have puffiness along the jowl area and heaviness in the cheeks, which gives a sagging appearance,” Goldstein explains. “By using acupuncture, we’re affecting what’s going on visually.”

Goldstein customizes each treatment to meet a patient’s specific skin concerns. For me, the treatment began with steps I’d expect from a standard facial (cleansing, followed by a gentle lactic acid peel). Next, a microcurrent tool, which, Goldstein explained, would (painlessly) send currents through my face to relax overly-tight muscles, lift lax ones, and boost circulation and blood flow. As she pressed the tool into my skin using firm upward strokes, I sensed a vague metallic taste in my mouth — a side effect of the current. After massaging one side of my face with the microcurrent tool, Goldstein suggested I sneak a peek at my reflection. Upon looking in the mirror, I noticed the side she had worked appeared slightly more toned, lifted, and less puffy than the other. 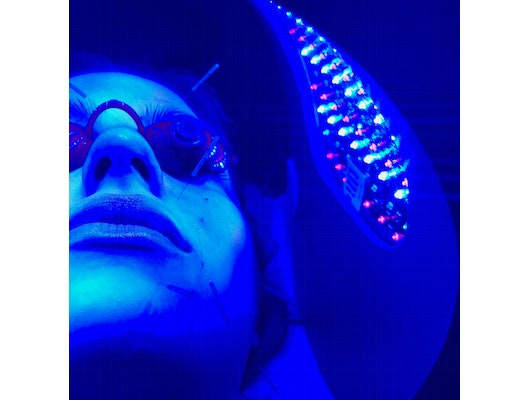 After using microcurrent on both sides, Goldstein began the traditional acupuncture portion of the facial — which, as I mentioned previously, didn’t hurt in the slightest bit. Once the needles were intact, Goldstein slid a pair of goggles over my eyes before placing what looked like a gel manicure light over my face — which, she explained, would emit blue and red LED light. (Sidenote: unlike the light from gel manicure machines, LED light has been used in dermatologist’s offices to stimulate collagen, heal skin, and reduce inflammation.)

Instinctively, I closed my eyes and allowed the light wash over me. To say I was relaxed is an understatement; rather, I was in a twilight state of semi-consciousness. After 20 minutes, I was woken gently from my zen, the light was removed, and Goldstein finished the treatment with an oxygen wand — a device which pressurizes a mélange of glow-boosting ingredients and pushes them deep into the skin for maximum absorption.

When I sat up, I was glowing like a beacon of light from within. My face looked — and felt — noticeably firmer, more lifted, and much less puffy. Unfortunately, my post-treatment visage would eventually return to its pre-AcuFacial state, but the good news is that it’s possible to “train” facial muscles and equip them with muscle memory.

“When you first go to the gym, you start to build and sculpt muscles,” she analogizes. “Once they’ve been sculpted, then you can slack off a little bit. When you return, the muscles pop right back. Same thing with your face.” For beginners like myself, she recommends weekly treatments for ten consecutive weeks, followed by occasional maintenance treatments. Now that’s one membership I’d happily sign up for.