I’ve inherited a lot of wonderful things from my father, with my Irish heritage being number one. I’ve been wearing my Claddagh ring everyday for the last 15 years. I break out my Irish step dancing moves in bars every so often, and I pour a “cuppa” Irish breakfast tea every morning. There is so much that I appreciate about my strong roots — but my incredibly sensitive, pale, easily sunburned skin with bright-red broken capillaries is definitely not one of them.

This condition has especially affected the area around my nose. For many years, I’ve used concealer to cover up the broken capillaries, and even avoided blowing my nose in fear that my makeup would rub off on the tissue.

I thought I was going to be stuck with my broken capillaries (and constant concealer touch-ups) forever, until I discovered lasers. A pulsed dye laser (or PDL) can significantly diminish the size of a broken capillary, which is essentially just an enlarged blood vessel sitting under the skin. When I was offered a chance to try out the VBeam Perfecta® laser, I booked an appointment with Jennifer MacGregor, MD, at Union Square Dermatology immediately. 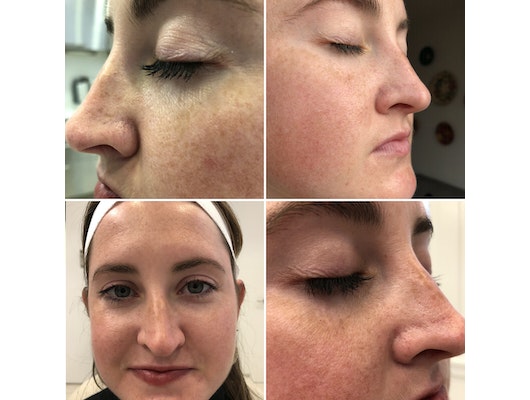 Before the treatment, we took photos of my skin, and McGregor explained that the laser would “feel like someone is flicking rubber bands across your face.” We debated applying numbing cream to my skin, but since it could potentially compromise the results of the laser and render it not as effective as it could be without the cream, I opted to suck it up and fight through any discomfort. Since I am prone to getting cold sores, MacGregor gave me a prescription antiviral medication to take before and after the laser treatment to prevent one from forming. (Trauma to the skin, such as a laser treatment, can sometimes activate a cold sore occurrence.)

Once the Vbeam was fired up, MacGregor applied an alcohol wipe across my face. “This will irritate your skin so that I can more easily see where all the redness and broken capillaries are,” she said. Her assistant handed me some not-so-sexy eye goggles to wear, and after they both applied their own eyewear, we were ready to go. 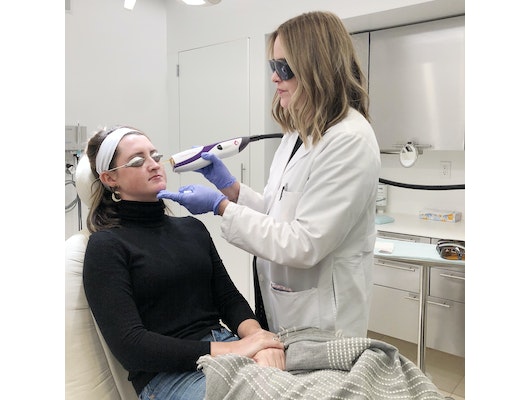 The first burst of light was a bit shocking, but once I had been hit with the light a few times, I started to get used to it. The Vbeam’s dye medium generates a specific wavelength of laser light, and is then selectively absorbed by blood vessels in the skin. Each pulse heats up vessels internally, causing them to swell and be destroyed. The visible blood vessels are then reduced over time as the body clears the treated fragments.

MacGregor took less than 10 minutes to treat my nostrils, cheekbones, and some of my chin. Since the VBeam’s applicator head was too large to treat the broken capillaries under my nose, we decided to use a KTP laser, which had a smaller head to easily reach that area.

Be the first to get the latest on skincare, beauty, and medical aesthetics
I have read and agree to the Spotlyte Terms and Conditions and Privacy Statement. I confirm that I am 18 years of age. By providing my email address, I agree to receive information from Allergan relating to Spotlyte and other Allergan products and services.

“Should I stop blowing my nose so hard?” I asked MacGregor after the treatment, wondering how I can prevent these broken capillaries from popping up again.

Once MacGregor confirmed my nose-blowing pressure wouldn’t make a difference, I wondered what could help (aside from an expensive laser treatment). That’s when I learned that topical products typically only slightly improve the look of broken capillaries. “Topical antibiotics and calming agents can reduce inflammation, redness, and slow progression,” explains MacGregor. “Other [prescription] topicals constrict the blood vessels so they aren’t as reactive, improving redness and flushing.” 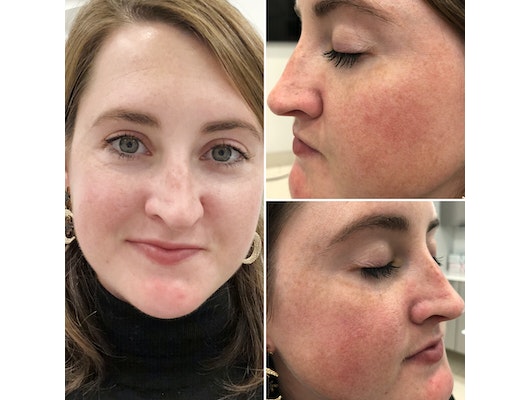 Although these treatments aren’t as uncomfortable as a laser treatment might be, they certainly aren’t as effective. The Vbeam laser was slightly uncomfortable to sit through, but nothing I couldn’t handle — and I was thrilled with the results. My face was a bit red right after I left MacGregor’s office, but was undetectable by the end of the day, with all the broken capillaries around my nose obliterated. I was faced with some purple bruising around my nose the next morning, but MacGregor informed me that it was a broken blood vessel, and would easily heal on its own.

It took about a week to notice that the other capillaries and redness on my face began to fade. I did a double-take in the mirror after a particularly difficult workout, and couldn’t believe that, for the first time, I didn’t look like a walking tomato. The laser had not only treated my broken capillaries, but had also diminished my facial redness more than I had expected. 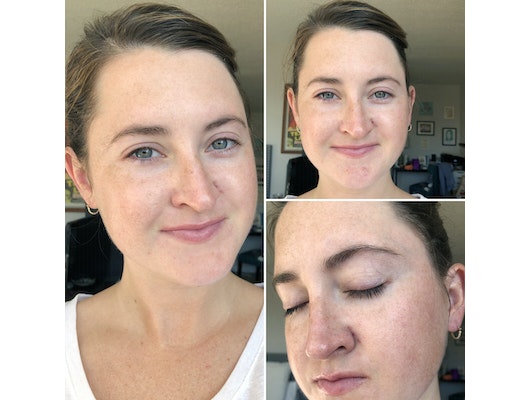 Unfortunately, there is no one-and-done treatment to keep broken capillaries restricted forever, and if you want them to stay invisible, it’s typically advised that you get up to three of the laser treatments done every three to four weeks, depending on the severity of your broken capillaries and facial redness. After that, you could need additional treatments or follow-up therapy (consult with your provider on what’s best for your needs).

While the treatment isn’t cheap (prices typically range from $350 to $750, depending on the practice and the area that’s being treated), it can be worth ditching the hassle of reapplying concealer throughout the day. I’m looking forward to my next Vbeam laser appointment in about a year, but until then, I’ll be celebrating all the fun aspects of my heritage. 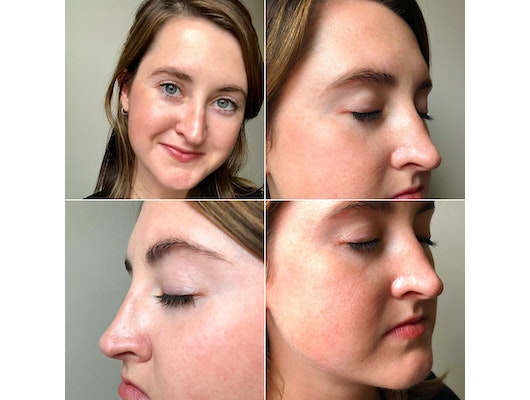 The VBeam Perfecta laser treatment was gifted to the author for the purpose of writing this article.